Emmett Till & His Mother

Findings at Nuremberg led directly to:

Geneva Convention on the Laws and Customs of War  (1949)

How to help: Add our site & hashtag to your emails & PROTEST signs - nothing less will matter. See my complaints to the highest of levels - education-medical-military is bought and paid for along with our reps ... $$$ and parties OUT of politics - Demand investigations and justice also for Dr. Cosmides & Joan M., among many others!!! Read below...

NO  TO GIMENEZ - SEE INFO BELOW - ?s info@ourconstitution.info

COMMENTS - WE DESERVE MUCH BETTER THAN OUR VICIOUS, COUNTERPRODUCTIVE DUOPOLY

CIA (INTEL) OUT OF OUR SCHOOLS BUT FOR JOB FAIRS, RETIREE TEACHING

SEE INFORMATION ON OUR BOOK  EISENHOWER'S WARNING UNDER OUTREACH

SEE OTHER COMMENTS - MORE ABOUT DEATHS, ALL TOPICS

Join us in Miami! Send us protest pics wherever you are! 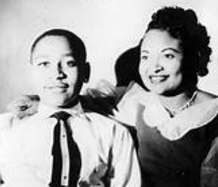 “…we must guard against the acquisition of unwarranted influence, whether sought or unsought, by the military-industrial complex. The potential for the disastrous rise of misplaced power exists and will persist.
... We must never let the weight of this combination endanger our liberties or democratic processes. We should take nothing for granted. Only an alert and knowledgeable citizenry can compel the proper meshing of the huge industrial and military machinery of defense with our peaceful methods and goals, so that security and liberty may prosper together…”  President Eisenhower - January 17, 1961 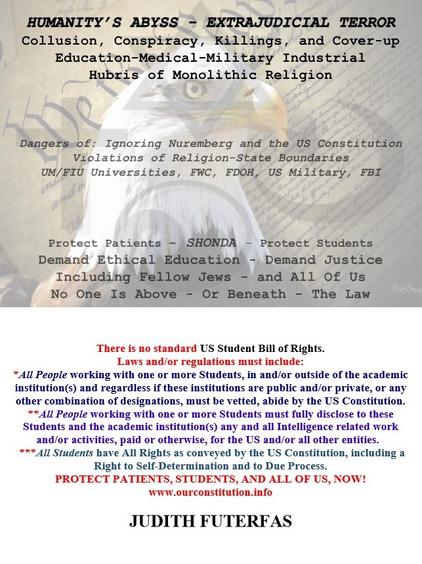 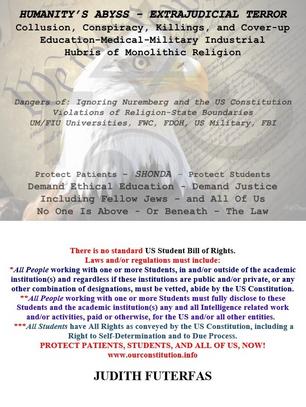 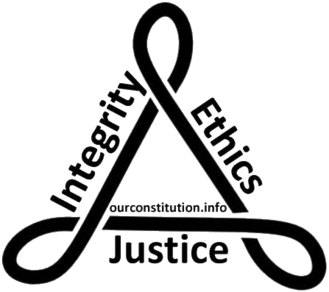 The Organization is nonprofit, nonpartisan, and promotes fidelity, respect, and understanding of the United States Constitution by distributing copies of Our Constitution and providing community outreach enabled by volunteers and donors.

We are a nation guided by laws and Our Constitution is the foundation of those laws.

To convey the important rights we all share, including due process and unalienable rights, The Organization intends to promote awareness of Our Constitution through education including community and voter outreach.  Importantly,

The Organization intends to convey the fact that in the United States of America, no one is permitted to be “above the law”, nor will anyone be beneath it.

The Organization hopes to convey the inspiring human qualities the framers of our founding documents possessed and strived for, including bravery, insight, thoughtfulness, integrity, and ethics.

The Organization hopes to encourage others to abide by the laws and rights conveyed in Our Constitution and other founding documents, and to follow those important examples of character our    Founders exhibited, for the betterment of ourselves, our families, and society.

SEE OUR BOOKS BELOW

​​Please DONATE  to help with our efforts for increased protections for PATIENTS, STUDENTS,  & ALL OF US

See Home (below) and  Medical-Military  (Under Home tab) 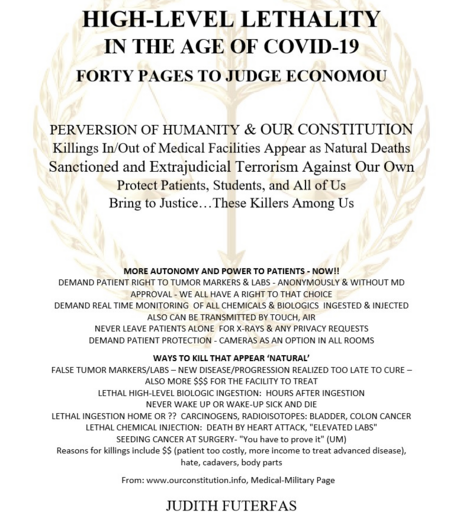 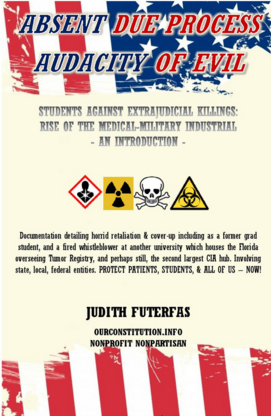 See all books under OUTREACH tab at top​

Thank you for stopping by!!  If you think what we are doing is important, please pass our site along!!

http://thehill.com/blogs/blog-briefing-room/news/356601-petraeus-we-in-uniform-protect-the-rights-of-others-to
https://twitter.com/ThisWeekABC/status/922087384602230787/video/1
General Petraeus pushed back on White House press secretary Sarah Huckabee Sanders's comments, saying  "I think we’re all fair game ... We, in uniform, protect the rights of others to criticize us, frankly ... At the end of the day we are fiercely protective of the rights of our Americans to express themselves."

http://nypost.com/2017/01/11/schumer-predicted-intelligence-officials-would-get-back-at-trump/ “ 'Let me tell you, you take on the intelligence community, they have six ways from Sunday to get back at you....they are very upset with how he has treated them and talked about them.'  Schumer was referring to Trump ... questioning the legitimacy of the Russian hacking probe."

Ed note: So, Senator Schumer, WHAT ARE YOU & CONGRESS GOING TO DO ABOUT THIS? A ROLE OF THE INTELLIGENCE APPARATUS IS NOT TO ANTAGONIZE,   RETALIATE, OR "GET BACK AT YOU", BUT RATHER TO UPHOLD THE CONSTITUTION, RIGHTS, & SAFETY OF AMERICANS.  THESE AGENCIES SERVE AT THE BEHEST OF THE PEOPLE -- AS LONG AS ANY OF THESE AGENCIES CONTINUE TO EXIST,  WE DEMAND THAT THEY HAVE RIGOROUS CIVILIAN OVERSIGHT AND FOLLOW THE LAW.

(Draft  READ HERE or MORE below, see all books at OUTREACH TAB)

INVESTIGATE THE FBI'S ROLE IN THIS MASSIVE COVER-UP

https://www.statnews.com/2017/06/16/generic-drugs-biosimilars-pharma/
"The temptation to avoid generic competition can be overpowering. Delaying generic competition for as little as six months can be worth half a billion dollars in sales for a blockbuster drug."

Deaths of 90+ holistic doctors - many in Florida

SAEK.INFO - FOR THE SAKE OF HUMANITY

WHY HIDE SURVEILLANCE TAPES? WHY HIDE HIS LAST NAME?

There is no standard US Student Bill of Rights.
Laws and/or regulations must include:
*All People working with one or more Students, in and/or outside of the academic

institution(s) and regardless if these institutions are public and/or private, or any

other combination of designations, must be vetted, and abide by the US Constitution.
**All People working with one or more Students must fully disclose to these Students

and the academic institution(s) any and all Intelligence related work and/or activities,

paid or otherwise, for the US and/or all other entities.  https://www.intelligence.gov/
***All Students have All Rights as conveyed by the US Constitution, including a

Right to Self-Determination and to Due Process.

PRESIDENT TRUMP - TELL US WHAT YOU KNOW ABOUT THESE "KILLERS"

WE DEMAND JUSTICE AND THAT NO ONE IS ABOVE THE LAW

NO EXTRAJUDICIAL KILLINGS ON OUR SOIL

& DUE PROCESS FOR ALL

PhD entomologist (?) - How familiar is he with the Human system? Ingested biologics - "never wake up"

INVESTIGATE THE FBI - UM's Susanna Arias Morales - Who is her FBI relative (from El Paso?)

NO AMERICAN IS A LAB RAT FOR ANY ENTITY - NO ONE, ANYWHERE, SHOULD BE ...

NO ONE IS BENEATH OR ABOVE THE LAW - NOT DOCTORS, LAW ENFORCEMENT, INTEL,

STATES, MILITARY, OTHER STAKEHOLDERS, & PRESIDENTS - WHAT DOES OBAMA KNOW?

https://www.ciaagentedu.org/florida/: "... the CIA became one of the largest employers in Miami.  Its base at the University of Miami became the world’s largest CIA station in the late 1960s with the exception of ... Langley ..."

Call Gov DeSantis 850-488-7146 and demand an investigation - Remind him that NO ONE is above the law, including Marco Rubio and his UM benefactor Braman's billions - Who killed UM patient Joan M, Rubio?

To request a copy of the 40 page Court submitted, detailed report and time-line, email info@ourconstitution.info

DESANTIS, SCOTT, & RUBIO ALL KNOW - MASSIVE COVER-UP AT THE HIGHEST OF LEVELS

Mucarsel-Powell has done nothing to help - WHAT IS SHE DOING IN OFFICE?

See concerns Medical-Military page under Home - Is the CIA/MILITARY running the Country?

MDC Mayor Gimenez- What did he "authorize"?  What does he know?  Is he a killer in these regards?

UM LINKS*, HAVE MUCH MORE DOCUMENTATION:

In response to his threat I replied, "That is attempted murder."  He said, "You have to prove it."

At the time of threat he also said, "You have complained about a lot of people."  I was fired after reporting that threat

At another time, in regards to my complaints, he told me that, "We don't mention people's names here."

UM patient  (Joan M)  was killed  in a regional hospital within a month or so after that reporting - she was fairly young, not naturally imminently dying or mortally ill - she had a chronic, managed illness and had, "taken a turn" at her apt where she lived alone - her death was time-lined in morbid, hacked emails over the week she was in hospital and she was illegally held in restraints (I know because UM sent me a training on restraints for the first time in 12 years after she deceased - I did not have patient contact and had no need to learn about restraints)

UM lead worker at the time of my 2011 UM lawsuit pointedly told me that she had a relative  in the FBI ...

Was never contacted by the  FBI despite several complaints to them - UM is also a large, long-term  CIA  hub

UM is private, receives millions in Federal money, and has MUCH less oversight than public universities

An  elderly Jewish lady in my UM dept. used religion vulgarly, berating multiple times that I should "go to Temple"

SEE four complaints, timelines just below, more documentation of this information at our  LINKS  page

EVERYONE WORKING WITH STUDENTS (IN THIS CASE FROM OUTSIDE THE ACADEMIC INSTITUTION), MUST BE VETTED

Markley has apparently left government, Flamm is apparently still with FWC - Neither are the character and caliber of people I want my tax dollars supporting as: representatives of the People, in positions of authority/power, and/or working with students. Along with UM, MDC, and the State (DOH, etc.), they need to be investigated, collaborators pursued, and due process implemented. See video MDC Manatee Protection Plan Review Committee - Markley was Chair.  This Editor (on that Committee), noted PUBLICLY that some members stood to benefit financially from some of the items THEY WERE VOTING ON -- They remained on, and voted on those items ...

*Complaint to State AG, CIG, AHCA- Murder of  UM patient Joan M. - Obama, Rubio did nothing to save her

RUBIO MUST STEP DOWN - MURDER OF JOAN M. - WEALTHY UM DONOR ALSO IS A RUBIO BENEFACTOR - NO RESPONSE FROM RUBIO REGARDING MY CONCERNS FOR THIS UM PATIENT

See more on this article and my comment re: "a lot of killers" at Medical-Military Industrial Page (link here or click under Home)

Others with "information" - see also links here (just above) and at our LINKS  page (listing not inclusive):

Attorneys Martin Saenz, Ilona Anderson - Miami/Broward - Paid them thousands, they bailed when I was fired